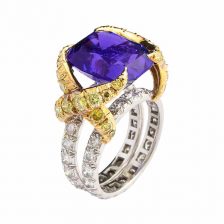 Jean Schlumberger was born in 1907 in Mulhouse in the German-controlled Alsace, into a family of textile industrialists Preferring art to textiles, his first jewelry creations were china flowers mounted as clips which he gave to his friends. They caught the attention of the couturier Elsa Schiaparelli who commissioned Schlumberger to design costume jewelry. After serving in the Army and then the Free French Forces, he set up workshops with his business partner, Nicolas Bongard, in New York and Paris. In 1956, Walter Hoving, the new chairman of Tiffany & Co., brought Schlumberger into the firm as a vice president. He also invited him to stamp his creations with his name, the first designer to be given this privilege. In 1961, the Wildenstein Gallery in New York held an exhibition of his jewelry and objets d’art. The Virginia Museum of Fine Arts has on permanent exhibit a selection of his jewels and fantasy objects on loan from Mr. and Mrs. Paul Mellon. Jean Schlumberger died in 1987, and his creations continue to be offered by Tiffany & Co.

schlumberger pieces from the collection