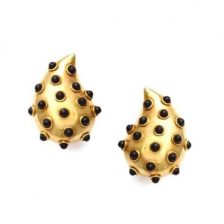 Angela Cummings was born in Austria and moved to the United States as a child. She later returned to Europe to study in Italy and Germany, graduating with a degree as a gemologist, goldsmith, and designer. In 1968, she began working at Tiffany & Co. under the tutelage of Donald Claflin; four years later, Tiffany’s presented her first collection. In 1984, she formed her own company with her husband which gave her the opportunity to expand her design repertoire. Within a year, the designs were offered at Bergdorf Goodman. She is also represented at Bloomingdales, Neiman Marcus, Saks Fifth Avenue, and Shiseido, Japan.

cummings pieces from the collection