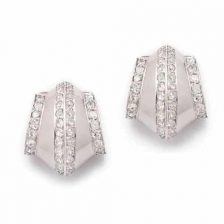 Suzanne Belperron began her career designing for Jeanne Boivin from 1925-1933. She joined Bernard Herz in 1933 and became one of the pioneers of modern dress and jewelry, ranked with René Boivin, Chanel and Schiaparelli. Her style was distinctive, bold, imaginative and celebrated on both sides of the Atlantic. An intrepid traveler, Belperron voyaged to the Near East to study ancient gold work and to India to select rubies and sapphires. She was inspired by nature and ethnic sources such as the paisleys of the Orient, Mayan ornaments and African tribal designs. In 1945, she established a partnership with Herz’s son, Jean. Known as Herz-Belperron, this lasted until her retirement in 1974. The designs of Suzanne Belperron continue to be produced in Paris today and are offered exclusively by Edward J. Landrigan at Verdura, New York.

belperron pieces from the collection