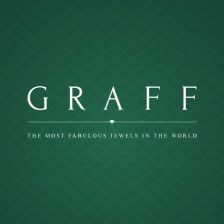 Graff was founded in Hatton Garden, London, in 1960 by Mr. Laurence Graff and has grown to its present position as one of the world’s leading jewelry manufacturers and dealers of the rarest and finest gems. Over the years, Mr. Graff has handled some of the world’s most fabulous and treasured gemstones including The Idol’s Eye, The Emperor Maximillian, The Porter Rhodes, The Begum Blue, and La Favorite—to name but a few. He has also created some of the most exciting and unashamedly glamorous jewelry of the time – all of which are created in-house by highly skilled craftsmen. Today, Mr. Graff has one of the largest facilities in the world for polishing and cutting diamonds in Johannesburg and also buys rough diamonds directly from the mines in South Africa. This enables him to have a leading edge in the industry and to offer a more exclusive selection of the finest stones to his clients worldwide. In 1973, 1977 and 1994, Graff was presented with the Queen’s Award to Industry & Export. The House of Graff is currently located in New Bond Street, Sloane Street and Brampton Road in London, on Madison Avenue in New York, at the Hotel de Paris in Monte Carlo, on board The World Residences at Sea, at the Wafi Centre in Dubai and Tretyakovsky Proyezd in Moscow.

graff pieces from the collection