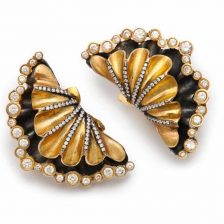 Marilyn Cooperman was born in Toronto Canada and emigrated to New Zealand aged 20 where she wrote and illustrated the New Zealand Herald’s first fashion and beauty column. In 1963 she decided to move again and found her way to Greenwich Village New York where she met Fred Leighton. At this time he was running a clothing boutique well known for Mexican wedding dresses and flowers and she set up a small studio on his premises and designed a resort wear collection for him.

In the 1970s, she established ‘Max and Marilyn’ which specialized in Art Deco-inspired clothing and sold through iconic New York department stores Saks Fifth Avenue, Bergdorf Goodman and Bloomingdale’s. The collections were well received in the press, including Seventeen magazine, where she later became Fashion Director. Two years later she was commissioned by Simplicity to design a series of Twelve Room patterns. These were the original prototypes for the home-sewing market and the success of her patterns helped spark a new wave of interest in the industry. This success led directly to her appointment as Editor in Chief of Simplicity followed five years later by a move to Vogue Patterns.

In 1987 Fred Leighton, now well established as a luxury estate jeweler on Madison Avenue, approached Cooperman to work for him as a designer, creating modern jewels that would appeal to his clients’ tastes. She accepted the challenge despite having no formal jewelry training and immediately immersed herself in the fine jewelry world learning techniques such as wax carving which she mastered with the help of Arthur Angelino of New York’s Fashion Institute of Technology. She not only designed new jewels but also re-designing outdated pieces, breathing new life into often unloved antique and vintage pieces.

In 1994, after several successful years at Leightons, Cooperman decided to set up her own company to create her original designs. Her bold and brilliant jewels have been widely collected and have featured in several significant jewelry books and in exhibitions at museums such as the Museum of Fine Arts, Boston and the Museum of Art and Design in New York.

cooperman pieces from the collection