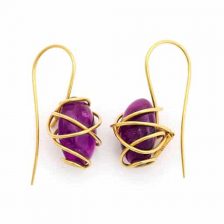 During the late 1980s, Tina Chow designed and produced several collections of jewelry. Using rock crystal, gold, silver, wood, bamboo, and silk cording. In 1987, the first collection was sold at Bergdorf Goodman in New York, Maxfield’s in Los Angeles, at Ultimo in Chicago, and later (from 1988) at Gallerie Naila Monbrison in Paris. Perhaps one of the best-known pieces in the collection is the “Kyoto Bracelet,” which is a woven bamboo bangle which encases seven rough rock crystals or rose quartz in their natural form. The crystals left loose inside the bamboo casing, rattle around as the wearer moves about. For the bamboo wrapping and basketry work in the collection, Chow enlisted Kosuge Shochikudo, one of Japan’s master craftsmen in the art of bamboo. In April 1988, designer Calvin Klein accessorized the showing of his Fall/Winter 1988/89 collection with Chow’s jewelry

chow pieces from the collection